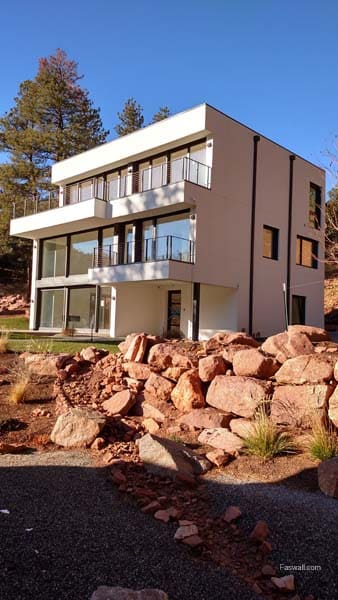 The property’s previous home burned down during a wildfire, and the new owners chose Faswall’s ICF wood form product because it is fire resistant and can withstand the high winds that frequently blow through the Rocky Mountains.

We stopped by and asked Mark to share some of his favorite things about using Faswall’s green building material, as well as some tips for people interested in using Faswall blocks to build their own homes. Check out the video below, or read Mark’s four main takeaways.

One of the great things about Faswall’s wood/concrete composition is that the blocks will not grow mold. However, there is still a danger that water can leak into parts of the structure that are below grade, leaving you with standing water in the basement.

Mark has an easy way of preventing this. Wherever the blocks are below grade, he applies a scratch coat of three parts sand, one part Portland cement to the Faswall blocks. A vapor-permeable waterproofing material is brushed on top of that, followed by a dimpled membrane and a layer of landscape cloth. All these products should be available at lumber or building supply stores, and they’re all simple to attach to Faswall green building blocks. “Any moisture that hits the side of the wall will . . . shed down to our perimeter drain and go out to daylight,” Mark says – keeping it away from your foundation and your home.

Faswall’s two-foot by one-foot blocks can help take the guesswork out of creating window opening that are the right size. In this home, the owner planned on windows that were an even number of feet, just like the Faswall blocks. “The block layout worked perfectly with the window sizing,” Mark says. “The designer set up everything to where the window openings [corresponded with the block size].”

Here’s another way Faswall saves you time when building your own home: the window frames can be fastened directly to the blocks, eliminating the need for permanent bucks. Mark roughed out the window openings so the installer could slide the windows right into the opening and attach them directly.

3. Faswall blocks are uniform yet flexible

Lots of people who use Faswall green building blocks aren’t contractors but still want the joy of a “do it yourself” home. One of the advantages of using Faswall is that the blocks are all the same size and shape, making installation straight-forward and intuitive. In the video, Mark demonstrates how the two-foot by one-foot blocks marry up to each other to make perfectly aligned walls.

However, there is some flexibility with the blocks, so they don’t all have to line up two-by-two. If there’s a place where you need a one-foot by one-foot Faswall block, they are easy to cut in half with a normal wood saw. Faswall also makes a flat panel block that’s easy to attach to the standard block with spray foam and screws. It can be used to create decorative accents or add architectural interest. “We put sort of a belly band around the building, which helps architecturally reduce the height of the structure,” Mark says of his most recent project.

When you’re ready to add your home’s internal wiring, Faswall has a built-in spot for it: the cores down the center of each block. Rather than filling those cores with cement, simply feed your wires through them and wherever they need to go. Mark likes to add double junction boxes because, among other things, it gives the electrician some flexibility; he or she can add an outlet as well as a data line or phone jack. But whatever you decide to do, it will seem familiar to your contractor: “The electrical goes through the framing just like it would in a conventionally built home,” Mark says.

Want to learn more about the benefits of using Faswall green building blocks? Give us a call or contact us.