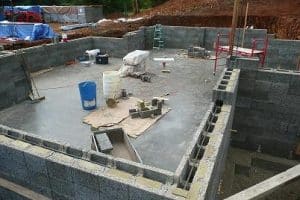 When Rich Marshall, an environmentally-conscious homeowner in Seattle, moved a recycled home, he needed a basement foundation to set it on.

He initially thought he’d have to use conventionally-poured concrete for his foundation.

That is, until he discovered Faswall and was thrilled about the following benefits of a Faswall-block basement:

Faswall ICF eliminates the damp/dank smell and feel of a traditional basement.

Wood fiber cement is vapor permeable and provides an air quality that is fresh, a temperature that is moderated, and a relative humidity that is constant. The indoor environment does not support fungal growth and spores.

Faswall blocks create a finished wall surface in the inside which does not need to be firred out and insulated (unlike a poured concrete basement).

The Faswall ICF surface can be left as is and finish trimmed if desired, thereby creating an attractive surface (see this video as an example).

Or, the surface can be plastered to directly, or dry-walled directly if desired.

Another beautiful option is to order Faswall block whereby the interior surface of the block is surface-trimmed to expose the wood fiber chips (see this video).

With conventional concrete, you have no other option other than to frame, insulate, and drywall it, which adds to the cost, time, and hassle of building.

And let’s not forget that do-it-yourselfers can stack Faswall block with ease in the initial construction process!

One of Rich’s main concerns was building in an environmentally-friendly fashion. He was pleased to learn that Faswall block is one of the greenest building products on the market.

Not only would he get the solid foundation he needed, he would be doing good for the environment as well.

A Faswal ICF-built basement will cost approximately the same as building a poured concrete wall basement, assuming that interior wall was to be finished (ie. firred out and insulated).

Faswall ICF is no more expensive than erecting and striping concrete forms, and then going through all the stages of stick framing against that concrete wall and insulating it to the level of insulation already available by building with the Faswall ICF.

Check out what Rich said about his experience building his Faswall block basement: